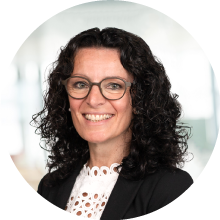 
Samantha is the Chief Knowledge Officer at ATOZ.

Samantha started working in Luxembourg in the tax department of Arthur Andersen in 1998 and subsequently Ernst & Young in 2002 where she was intensively involved in international tax projects focusing on the financial & private equity sector.

She has been leading the knowledge department of ATOZ since 2005 and currently occupies the role of Chief Knowledge Officer. Samantha has been actively involved in various industry groups including the ALFI Double Tax Treaty sub-committee. Samantha was appointed by the end of 2009 as a member of Taxand’s core knowledge leader team.

Samantha is also the author of numerous articles on tax related topics published in various professional journals such as the International Tax Review, Tax Notes International and Bloomberg BNA.

Samantha holds a DJCE, DESS in French Business and Tax Law at Université Jean Moulin (Lyon III, France). She holds a Bachelor’s degree in German and French Business Law and LLMs from the Universities of Paris - Sorbonne (France) and Cologne (Germany).

She speaks English, French and German.