Are EU Institutions becoming the new supra-national tax authorities? Part I – What are the right powers? 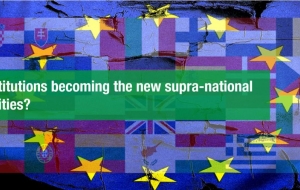 Let’s start by taking a look at this statement from the official EU website:

“…the EU does not have a direct role in raising taxes or setting tax rates. The amount of tax you pay is decided by your government, not the EU”

“…the EU's role is to oversee national tax rules – to ensure they are consistent with certain EU policies, such as: promoting economic growth and job creation; ensuring the free flow of goods, services and capital around the EU (in the single market); making sure businesses in one country don't have an unfair advantage over competitors in another; ensuring taxes don't discriminate against consumers, workers or businesses from other EU countries”

These statements seem somewhat baffling in light of the fact that the EU is increasingly taking on a role of regulator, proposing Directives which have direct and significant consequences on tax law in Member States (“MS”) and which include significant delegated powers for the Commission. One of the more eyebrow-raising proposals of the EU Commission aims to enforce a mandatory common corporate tax base (“CCTB”). CCTB is a single set of rules used to calculate companies' taxable profits in the EU. Having gained considerable steam from the resurgence of public interest in fighting tax avoidance, the CCTB Proposal, initially introduced in 2011 and then shelved, is back at the center of political and societal debates on whether a common tax base is competitive, good for business, simple, or even necessary.

The CCTB Proposal raises fundamental questions on both the fiscal role of EU institutions and the impact of such a proposal on the fiscal sovereignty of MS. Even though the power to levy taxes remains exclusively in the hands of MS and the European Union (“EU”) has no fiscal capacity of its own, there is no doubt that EU law does, to some extent, interfere with this sphere of state responsibility. But what kind of fiscal Europe is being created via fiscal Directives? And how far can the EU institutions take tax measures?

The EU treaty is rather mute on the subject of legislating direct taxation, with one article in particular frequently cited as the basis for these actions. Article 115 of the Treaty on the Functioning of the EU (“TFEU”) authorises the EU Council, acting unanimously on a proposal from the EU Commission, to issue Directives for the approximation of laws that "directly affect the establishment or functioning of the common market”. According to the wording of the article, the introduction of direct taxation Directives by the Council is limited by two important factors:

Much more subtly, the use of the word “approximation” in the article 115 of the TFEU, also limits the scope of the measures taken. In comparison, the TFEU provides for the “harmonisation” of turnover taxes, excise duties and other forms of indirect taxation. There is no definition for either “harmonisation” or “approximation” in the EU treaties. Some authors seem to consider them synonyms. A literal interpretation, however, will reveal that each word has its own distinct meaning. Both terms do not require the same degree of “integration” of domestic laws of MS. On one hand, the aim of approximation of laws is to reduce disparities between legal systems (without necessarily abolishing them) by allowing MS to choose from a range of possibilities. On the other hand, the aim of harmonisation is to align national regulations with Community standards agreed upon in Council Directives (which nevertheless leave room for MS legislation). The use of the term tax harmonization is confusing, insofar as it is often used for the establishment of identical tax bases, rates, and systems throughout the EU. But, although harmonisation aims at implementing positive integration, it does not fully correspond. It implies neither unifying, nor making uniform tax provisions (e.g. VAT regimes across the EU).

The question we should really be asking is whether the EU institutions are overstepping bounds by submitting the CCTB Proposal in the first place. In this respect, it is also interesting to note that, since the Treaty of Rome in 1957, the coexistence of different tax systems within the EU has never been seen as creating major distortions which “directly affect the establishment or functioning of the common market”. So why would it be different today? Could it be a consequence of the current international crusade against tax avoidance? Maybe, but this crusade has been going on, with various intensities, since the dawn of time, so why has it become an EU problem now? In addition, there are existing measures built on the OECD BEPS plan that deal with tax avoidance so why do we need to add CCTB?  And, in any case, nothing, not even the fight against tax avoidance (as important as it may be), should allow EU institutions to flout the rules inscribed in the EU treaties to protect the rights of MS and their citizens.