On 8 August 2019, the Luxembourg legislator released the draft law implementing EU Directive 2017/952 of 29 May 2017 (the “Anti-Tax Avoidance Directive 2” or “ATAD 2”) which provides for a comprehensive framework to tackle hybrid mismatches in an EU context and transactions involving third countries as from 2020.

What are hybrid mismatches?

Hybrid mismatches typically originate from a different tax treatment of an entity, a permanent establishment or a financial instrument under the laws of two or more jurisdictions and may result in deduction without inclusion or double deduction outcomes.

What is the scope of the hybrid mismatch rules?

Nevertheless, in general, the hybrid mismatch rules only apply in cases of transactions between associated enterprises with an ownership threshold of at least 50% in terms of voting rights or capital ownership, or an entitlement to at least 50% of an entity’s profit (i.e. this threshold is reduced to 25% in case of hybrid financial instruments). When assessing whether the related party test is met, the shareholding percentages of otherwise unrelated parties may need to be aggregated if a person is “acting together” with another person in respect of the voting rights or capital ownership of an entity.

What are the limits of the hybrid mismatch rules?

Second, mere timing differences should not be treated as giving rise to mismatches in tax outcomes as long as the income is included within a reasonable period of time.

Fourth, differences in tax outcomes that are solely attributable to transfer pricing adjustments do not fall within the scope of the hybrid mismatch rules.

Fifth, with regard to payments by a hybrid entity, deemed payments between a head office and a permanent establishment and double deductions, the hybrid mismatch rules only apply if and to the extent a deduction is set-off against income that is not dual inclusion income (that is any item of income that is included under the laws of both jurisdictions where the mismatch outcome arises).

Sixth, where the provisions of another EU Directive such as the Parent-Subsidiary Directive lead to the neutralisation of the mismatch in tax outcomes, there should be no scope for the application of the hybrid mismatch rules (e.g. a deductible payment made by an EU subsidiary of a Luxembourg company should not benefit from the participation exemption regime).

How are hybrid mismatches neutralised?

ATAD 2 follows the recommendations of the OECD in regard to Base Erosion and Profit Shifting (“BEPS”) Action 2 that aim at neutralising the effects of hybrid mismatch arrangements through the application of linking rules that align the tax treatment in two or more jurisdictions.

More precisely, Article 168ter of the LITL sets out a primary rule and a secondary (or defensive) rule for the neutralisation of mismatch outcomes. This mechanism should prevent more than one country from applying the hybrid mismatch rules to the same arrangement and therefore avoid double taxation.

According to the primary rule, the deduction of a payment is denied to the extent that it is not included in the taxable income of the recipient or that it is also deductible in the counterparty jurisdiction. When the primary rule is not applied, the counterparty jurisdiction may apply a defensive rule, requiring the deductible payment to be included in the income or denying the duplicate deduction depending on the nature of the mismatch.

What might be the impact on Alternative Investments in Luxembourg?

Hybrid mismatches such as hybrid financial instruments and hybrid entities may also occur in the context of Alternative Investments irrespective of whether or not these are intentional.

For example, a Luxembourg investment fund established in the legal form of a partnership (for example, a special limited partnership) or in contractual form (i.e. fonds commun de placement, FCP) may be a hybrid entity if the fund is treated as opaque from the perspective of the investor jurisdiction(s). Thus, when the related party test is satisfied in these circumstances, otherwise deductible interest payments to the fund may become non-deductible in accordance with the hybrid mismatch rules.

Given the particularities of US tax law, Alternative Investments driven by US investors may in particular be at risk to be impacted by the hybrid mismatch rules. Here, the potential existence of hybrid financial instruments and hybrid entities needs to be frequently analysed.

The following flowchart depicts an analysis of the hybrid mismatch rules: 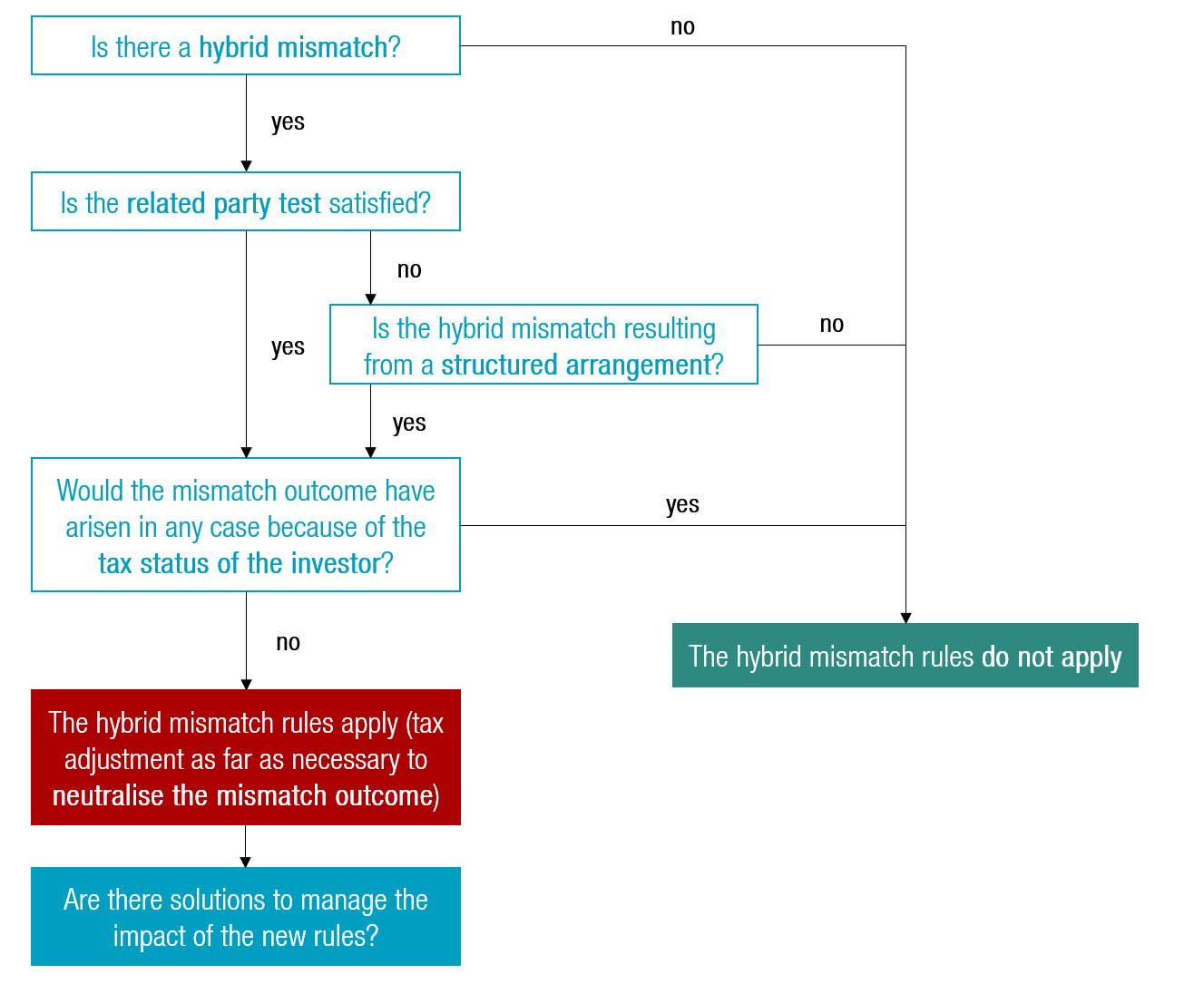 Who has the burden of proof?

However, although the hybrid mismatch rules do not require taxpayers to proactively provide comprehensive evidence when filing the corporate tax returns, the potentially severe consequences of Article 168ter of the LITL will pressure taxpayers to review all their existing investments and to include a hybrid mismatch analysis in each and every future tax analysis. After all, taxpayers should not wait to find out about a hybrid mismatch situation during an investigation by the Luxembourg tax authorities.

The hybrid mismatch rules are characterised by an extreme complexity which requires a good understanding of the overall investment structure and the foreign tax treatment of payments, entities, financial instruments, etc. Given that the burden of proof regarding the non-application of the hybrid mismatch rules is on the taxpayer, a hybrid mismatch analysis will, out of necessity, become an integral part of each and every tax analysis.

With only few months left in 2019 before the new hybrid mismatch rules will enter into force, taxpayers have to analyse existing investment structures in order to detect potential hybrid mismatches and to implement, where necessary, structure alignments before year-end. Ultimately, the complexity of the hybrid mismatch rules may also be an opportunity to manage their impact in practice.