The Misuse of EU Rules in the Name of Tax Justice: Comparing Apples to Burgers 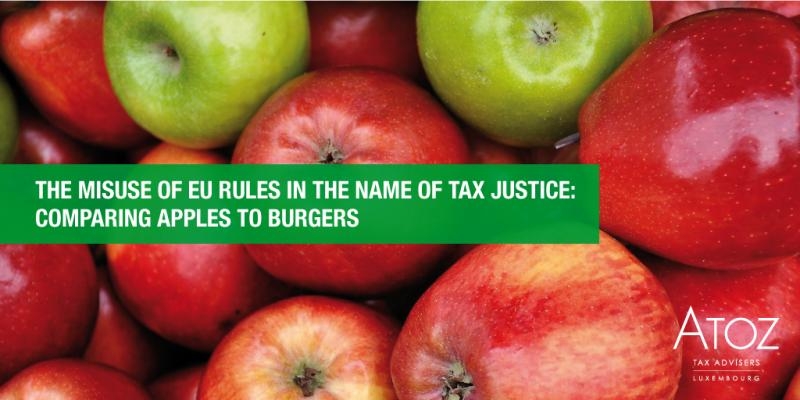 The Apple case has shot EU state aid rules into the headlines. It finishes the metamorphosis of State Aid from what was seen as a somewhat dull back-room legal field into a high-visibility front-line political topic. The case was announced in a high drama televised press conference which made headlines all around the world.

The Apple case was high profile because of the company concerned, the financial impact on budgets on both sides of the Atlantic and also because it brought simmering political unease with the subject of State Aid in tax matters to a head.

In this blog we will seek to frame some of the political questions in a more objective legal manner in order to bring structure to the political debates raging around the subject. We will look in particular at the Apple and McDonalds cases but similar considerations apply to others.

Shouldn’t the EU States concerned take the money and be happy?

Politically, it is tempting to say yes in the short term, as all the EU States concerned could certainly use the windfall. In the medium to long term, it would be an error in our view. The States concerned, rightly in our view, believe that they were applying their tax rules in line with their administrative practice. All of this in line with the exercise of the State’s national sovereignty and EU commitments. The EU commission disagrees. The next step in this disagreement is to take the matter to the European Court of Justice (ECJ) the Supreme Court in these matters that is binding on the EU commission and the EU States. This step is common in State Aid matters. For a State not to do this in a matter that is as important as these cases, would in our view be a unilateral surrender of sovereignty. On a technical level, we could even see a risk that the sums levied, absent an appeal, might not be regarded as a legitimate tax by other countries in foreign tax credit matters, leading to additional costs to the multinationals concerned.

Is this simply a grab for tax revenues by the EU commission at the expense of the US tax payer?

It is tempting to view it as such, as for each Euro recovered, there is a corresponding effect on the US budget. This was outlined in the recent letter from the US treasury to the EU. The impulsion for launching the cases looks very politicised and there is an understandable temptation to threaten some form of retaliation. There is a legal analysis in the final resort however and, if the final finding of the ECJ is that there is State Aid in one or more of the cases, our view is that the US should respect that. It is worth noting that the ECJ has also ruled in favour of taxpayers in recent cases that have the effect of shifting billions from the EU member States budgets to the US budget. Respect of the law cuts both ways.

However at a political level, in the same way as the Commission challenges the right of a tax authority to exercise their judgment (see below) in granting a ruling, it must be prepared to have its own judgement in selecting State Aid cases challenged. At present, the list of high profile US companies being challenged seems difficult to reconcile with an objective selection of cases.

Don’t the multinationals that have been avoiding taxes deserve to be taxed?

It can be tempting to moralise the issue at the expense of respect for the law and due process. The fact is that there are vastly different beliefs of what is a fair level of tax. Many of these beliefs are held to be a matter of morality. No amount of debate will reconcile these views into a single definition of what is fair. Differing views are balanced through a democratic process that leads to laws that must be respected by all. Any attempt to settle tax matters on moral grounds is therefore doomed to be subjective and anti-democratic.

Aren’t the rulings in some way abusive and therefore by agreeing to them, the EU States granted a special deal?

This is the heart of the commission’s case. Simply put, the commission is saying that the laws under which these structures were implemented are valid under State Aid law but the States should not have agreed to these outcomes in these circumstances. The basis of the cases is different: in the Apple decision, the Commission rejects the transfer pricing allocating the profits between head office and the Irish branch, in McDonalds, the initial investigation is around the recognition of a foreign branch. Both cases are similar however in that they required highly skilled tax officials to take a decision in complex situations based on the information available to them and the law in place.  In both cases, the officials granted rulings accordingly. In State Aid matters, the key question is whether the State granted a selective advantage. In our view, the same decisions could easily have been taken in the case of other taxpayers in the same fact pattern. Both legal questions are complex, often dividing opinions of skilled professionals; applying these laws in practice involves an element of professional judgement leading to a decision.

In Apple, the EU Commission second guesses the tax officials and, arriving at a different conclusion, which they seem to regard as an absolute truth, concludes that the local officials decision amounts to a selective advantage, without any consideration of whether the same conclusion would have been inevitable in any comparable fact pattern. The initial findings in McDonalds seem to indicate the same. The consequence would be that any administrative decision in tax matters, which the commission might in future disagree with, is subject to a 10-year uncertainty. We think this analysis is fundamentally flawed as matter of law, not to mention the major practical and political problems it creates.

Is this the right way to deal with the problem?

Both cases highlight “loopholes” in the international system. There are a multitude of loopholes in the international tax system. There has been a recognition of this and massive multilateral effort to address these loopholes in the “BEPS” initiative involving the G20 and the OECD. The BEPS action plan recognises that these loopholes arise from perfectly legal tax systems. The BEPS action plan in its basic premises concluded that the way to address the flaws in the global system is by legal change with a global coherence, while giving businesses certainty and predictability. The commission’s actions and findings fail to respect these basic premises as they lack a global coherence (what is the impact on double tax conventions for example) and have created a complete lack of predictability (is any tax authority decision now subject to challenge? What is the EU commissions “arms length” standard in transfer pricing?).

While we await the written Apple decision and the McDonalds decision with interest, it’s hard to avoid the conclusion that the Commission has taken State Aid into a new dimension.

Beyond the legal issues we have outlined above there are some profound practical and political issues. If Commission is prepared to challenge an individual EU taxpayer’s tax affairs in any jurisdiction if it doesn’t like the outcome, it substitutes itself for national authorities and governments in a way that brings us into unexplored territory. For example, do all individual tax payer assessments that involve an element of judgement have to be reviewed? Do bilateral transfer pricing agreements have to be blessed by the Commission? Do member States have to be concerned that in negotiating tax treaties (where again an element of judgement is required) they could be seen as acting selectively and so should their treaty partners seek reassurances from the commission?

In the middle of some difficult discussions on EU versus Member State, one could see this as a distraction that the EU can ill afford….