A pocket guide to DAC 6: The mandatory disclosure regime applicable to tax intermediaries 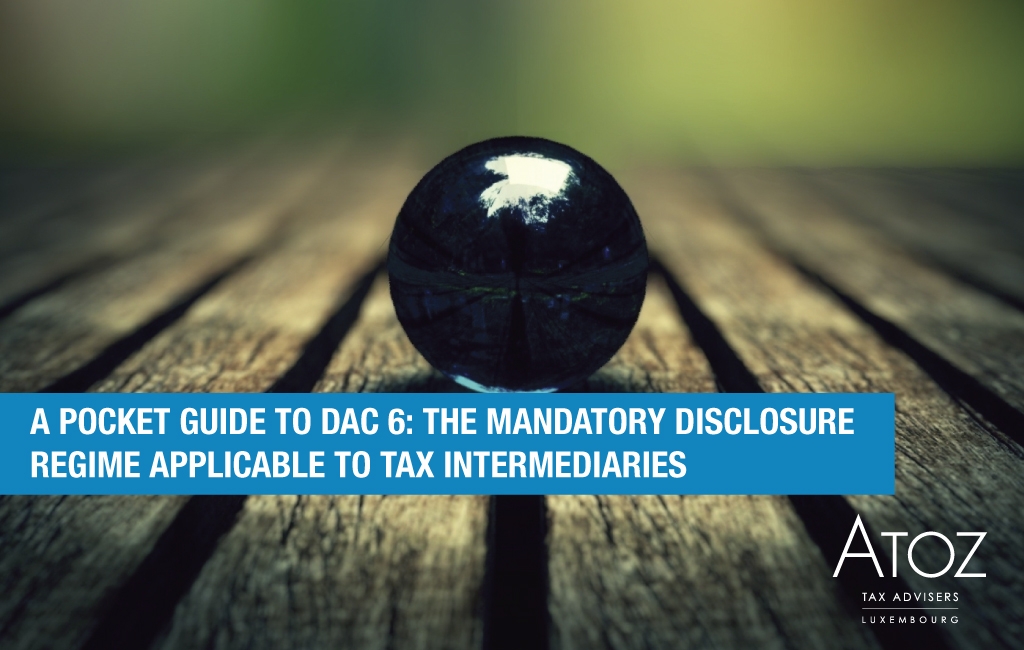 DAC6 requires EU Member States to introduce, in their national law, mandatory disclosure rules for cross-border arrangements. The new Directive was inspired by the Final Report on Action 12 of the OECD Base Erosion and Profit Shifting, or BEPS Project, providing recommendations regarding the design of mandatory disclosure rules for aggressive and abusive transactions, arrangements or structures.

By nature, investments and business activities of Luxembourg companies often have a cross-border dimension. In all of these cases, the question remaining is whether a particular piece of advice, or involvement in implementation, is reportable or not. In this blog article, we will analyse the features of the new mandatory disclosure regime and provide clear, practical guidance as to when a specific arrangement is reportable or not. We will be giving a special consideration to the impact on Alternative Investments made from Luxembourg. Because DAC 6 requires reporting on transactions implemented after 25 June 2018, even though the implementing legislation is not yet available, the directive has essentially already taken effect, making the need to understand and prepare all the more relevant.

What arrangements are subject to mandatory disclosure?

Arrangements that come within the scope of at least one of the so-called “hallmarks” defined in Appendix IV to the Directive may need to be reported under the mandatory disclosure regime. These hallmarks describe characteristics or features of cross-border arrangements that might present an indication of a potential risk of tax avoidance.

Hallmarks are generally divided into two categories: generic and specific hallmarks. Generic hallmarks target features that are common to promoted schemes, such as the requirement for confidentiality or the payment of a premium fee. Generic hallmarks can be used to capture new and innovative tax planning arrangements as well as mass-marketed transactions that promoters may easily replicate and sell to a variety of taxpayers.

Specific hallmarks are used to target known vulnerabilities in the tax system and techniques that are commonly used in tax avoidance arrangements such as the use of loss creation, leasing and income conversion schemes.

The Directive sets out the following five categories of hallmarks:

The term “arrangement” is meant to have a broad meaning and may also include a series of arrangements. However, the reporting obligations are limited to “cross-border” situations, namely those involving either more than one EU Member State or an EU Member State and a third country.

The reporting regime limits the number of reportable cross-border arrangements through the adoption of a threshold condition. This means that many of the hallmarks only trigger a reporting obligation when an arrangement meets the main benefit test (“MBT”), reducing the risk of excessive or defensive filings. This should enhance the usefulness of the information collected because the focus will be on arrangements that have a higher probability of truly presenting a risk of tax avoidance.

Who is obliged to report under the mandatory disclosure regime?

Luxembourg lawyers, tax advisers, accountants and other service providers are all bound by professional secrecy. Non-compliance with the professional secrecy may, in accordance with Article 458 of the Luxembourg Penal Code, be punished with imprisonment (up to six months) and a fine (up to EUR 5,000). Accordingly, when a cross-border arrangement is reportable, the reporting obligation should be shifted to the taxpayer except where the taxpayer explicitly waives its right of confidentiality. This aspect will need to be clarified by the Luxembourg legislator when implementing the Directive into Luxembourg law.

An intermediary is defined as any person that designs, markets, organises or makes available for implementation or manages the implementation of a reportable cross-border arrangement. This may include, in particular, tax advisers, lawyers and accountants. The Directive further extends the circle of intermediaries to “any persons that know, or could be reasonably expected to know that they have undertaken to provide, directly or by means of other persons’, aid, assistance or advice with respect to designing, marketing, organising, making available for implementation or managing the implementation of a reportable cross border arrangement”. Accordingly, the understanding of the term tax intermediary is very broad, including any professional that provides tax advisory services.

Thus, it does not suffice to prove that another intermediary has committed to do the reporting but it is necessary to prove the effective reporting by another intermediary. This obviously requires a certain extent of coordination between advisers in order to determine whether or not a cross-border arrangement is reportable and, if so, to ensure that only one intermediary files a report so as to avoid multiple filings in relation to the same arrangement.

Likewise, when there is no tax intermediary because, for instance, the taxpayer designs and implements a scheme in-house, the reporting obligation rests with the taxpayer who benefits from the arrangement.

When is the first reporting required?

The first reporting has to be made by 31 August 2020, covering reportable arrangements as from 25 June 2018 (the date of entry into force of the Directive). It follows that tax intermediaries have been required to track potentially reportable advice since 25 June 2018.

In addition, relevant taxpayers may be required to file information about their use of an arrangement for each of the years in which they have used it.

What is the main benefit test?

Many of the hallmarks set out in Appendix IV to the Directive are subject to an additional threshold test. Here, the EU opted for the MBT which is the most common threshold requirement. The purpose of the MBT is to filter out irrelevant disclosure and to reduce some of the compliance and administration burden of the disclosure regime by targeting only tax-motivated transactions that are likely to pose the greatest tax policy and revenue risks.

The MBT is fulfilled if “it can be established that the main benefit or one of the main benefits which, having regard to all relevant facts and circumstances, a person may reasonably expect to derive from an arrangement is the obtaining of a tax advantage”. Hence, this test compares the value of the expected tax advantage with any other benefits likely to be obtained from the transaction. According to the Final Report on BEPS Action 12, the MBT sets a relatively high threshold for disclosure.

It is interesting to note that the Directive explicitly states that the tax treatment of a cross-border payment at the level of the recipient cannot be the sole reason for concluding that an arrangement satisfies the MBT. Thus, it does not matter per se (i) if the jurisdiction of the recipient of a payment does not impose any corporate tax or imposes corporate tax at a rate of zero or almost zero or (ii) if the payment benefits from a full exemption or (iii) a preferential tax regime.

According to the Final Report on BEPS Action 12, the MBT compares the value of the expected tax advantage with any other benefit likely to be obtained from the transaction. This requires an objective analysis of all benefits obtained from an arrangement and is assumed to set a relatively high threshold for disclosure. Thus, the management of the tax position of a cross-border arrangement or investment that aims at generating income should not meet this threshold condition since any tax benefit, quite naturally, can only be a fraction of the overall income.

When analysing the MBT, it can also be helpful to have a look at how the UK has dealt with similar issues. The UK introduced rules on Disclosure of Tax Avoidance Schemes (DOTAS) back in 2004 that are built, like the mandatory disclosure regime provided in the Directive, around a set of hallmarks which determine whether a scheme should be reported. The UK also adopted the MBT as a threshold condition.

Guidance provided by HMRC in regard to the MBT explicitly states that “the advantage is one of the main benefits of the arrangement if it is a significant or important element of the benefits and not incidental or insubstantial.” Accordingly, the test is objective and considers the value of the expected tax advantage compared to the value of any other benefits likely to be enjoyed. The guidance further states that it should be obvious to any potential client what the relationship is between the tax advantage and any other financial benefits of the product they are buying.

How to determine reportable arrangements?

Determining whether advice on a particular arrangement is reportable under the mandatory disclosure regime is a two-step process. First, the cross-border dimension of the arrangement has to be analysed. Then, it has to be analysed whether or not one of the hallmarks is present. While some of the hallmarks, when present in a cross-border arrangement, trigger automatic disclosure obligations, other hallmarks are subject to the additional threshold condition (i.e. the MBT).

Where the MBT applies, it should set a relatively high threshold for disclosure, filtering out irrelevant disclosures which would otherwise dilute the relevance of the information received by tax administrations and increase the costs and administrative burden for taxpayers, tax administrations and tax intermediaries. In practice, cross-border arrangements may not meet the MBT if the taxpayer can demonstrate that the value of any (domestic) tax benefits was incidental when viewed in light of the commercial benefits of the transaction as a whole.

The mandatory disclosure regime applies to reportable cross-border arrangements as from 25 June 2018 and requires first filings by the end of August 2020. With this in mind, tax intermediaries and taxpayers have to get ready and track potentially reportable arrangements.