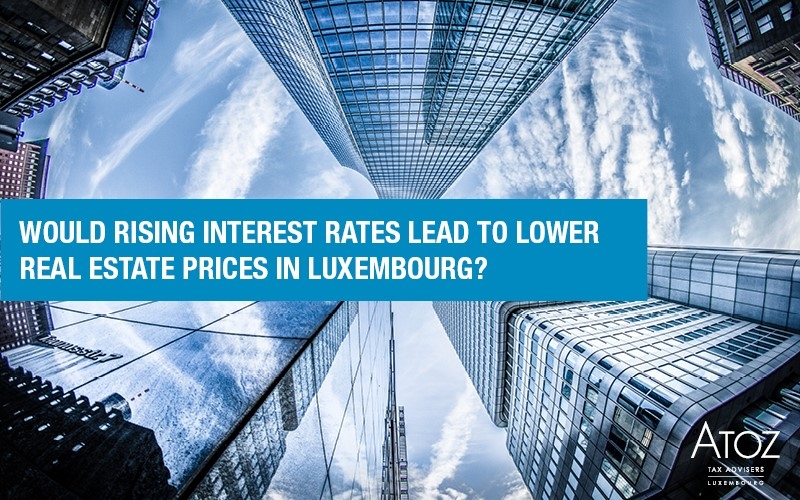 The Federal Reserve (FED) has raised the federal funds rate eight times over the last two years. And even though the chairs of the FED and of the European Central Bank (ECB) have announced that no increase is expected in 2019, what effects would an ECB interest rate increase have on real estate prices in Luxembourg? In order to answer this question, we will first have to look at what happened during past periods of rising interest rates in the US as well as in Europe and what is currently happening in the US, where interest rates have already been on the rise. Then, we will take the quirks and particularities of the Luxembourg real estate market into account to try to understand what an interest rate hike may represent.

The relationship between real estate prices and Central bank rates

Changes in interest rates also have an impact on the returns of other asset classes. Therefore, to keep a rate of return that is consistent with the inherent risk of real estate, prices may need to adjust. However, it is also very important to consider the specific economic factors driving Central Bank interest rate increases. The actions taken by the FED are a direct response to strong economic growth in the US, designed to prevent the economy from overheating. The European economy, with its slower but nevertheless existing growth is not immune to an interest rate increase by the ECB.

By examining periods where the FED increased interest rates due to a bullish economy, from December 1995 to April 1997 for instance, where the 10-year yield increased by 118 basis points, we can see that the effect on property values and total returns of real estate investments in the US was not negative. Quite the contrary: prices and returns increased by 10% over the same period.

What's the state of the Luxembourg Real Estate Market?

As long as rents are increasing and occupation rates remain high, the negative impact of rising rates was and is limited (or even non-existent), given a favourable enough economic environment. These aforementioned factors are clearly present in Luxembourg. Rents and prices have been on the rise for a while, vacancy rates, especially around Luxembourg City, are very low and the economic outlook is positive.

For example, vacancy rates for offices in the Kirchberg district were below 1% at year-end 2018 and remained below 4% for the last three quarters of 2018 for all office space in Luxembourg. Rents have increased by 25% since 2014 in the Central Business District.

The particular economic and demographic aspects of Luxembourg also need to be taken into account if we want to estimate the impact of rising interest rates on the domestic real estate market and understand the main value drivers in Luxembourg real estate.

The stable AAA rated economic setting, a seemingly insatiable demand for office, shopping and living space combined with an increasing number of foreigners who settle in the country, are putting pressure on real estate prices in Luxembourg. Both economic and demographic growth rates are well above those of surrounding regions. These factors, important value drivers, should lead to further increases in real estate prices. A minor increase in interest rates would not be enough to change this.

Another aspect driving up prices in Luxembourg real estate is the steadily increasing need for housing and office space that currently cannot be met by the limited number of houses and offices built. In order to meet the demand for apartments for instance, 6,000 new ones would need to be built every year, but only 2,600 actually come on the market. This shortage has a significant influence on prices and should not be heavily impacted by a change in interest rates. Despite the impressive number of new office buildings in business districts such as the Kirchberg or Cloche d’Or, available space is a scarce resource. The demand cannot be met and vacancy rates remain at very low levels.

These factors partially explain why prices in Luxembourg real estate were hardly affected by the subprime mortgage and resulting banking crises in 2008 and also explain why Luxembourg is an attractive market for foreign investors, as it is perceived as being relatively limited in terms of risk.

Cap rates that are above those of other European cities such as Paris or Frankfurt also make real estate in Luxembourg a desirable investment target for foreign investors and should keep demand high in the near future. In addition to the promise of a reasonably safe and well-performing investment, the large amount of dry powder raised and ready to be deployed together with the strategy followed by the government to attract more and more foreign investors, should also positively impact prices on the Luxembourg real estate market.

In conclusion, when analysing the situation in Luxembourg, it is near impossible to fall back on any traditional models or rules. As opposed to what we may expect in other European cities, the Luxembourg real estate market, unique in its status for foreign and domestic investors alike, is unlikely to slow down as a result of a Central Bank interest rate hike. Prices will continue their upward trajectory and demand will continue to grow as investors seek out tried and true opportunities in an increasingly uncertain global economic climate.

This article was co-authored by Nick Flammang.