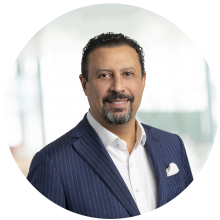 
Fatah is the Managing Partner – Operations of ATOZ and has been a professional in corporate law, mergers & acquisitions, private equity and investment funds and investment companies since 1999.

Fatah assumed the role of Managing Partner of FIDEOS between June 2010 and June 2011 and was a director of FIDEOS Financial Services, a regulated Professionnel du Secteur Financier (PSF) offering central administration services to Luxembourg regulated risk capital and specialised investment vehicles (supervised by the CSSF). Overall, he was responsible for the performance improvement of FIDEOS before its strategic sale in June 2011.

At present, Fatah acts as a director of several specialised investment funds supervised by the CSSF and also for non-regulated vehicles.

Fatah is qualified as a Chartered Accountant in Luxembourg (“Expert-Comptable”), holds a post-graduate degree in Company Law and Administration from the University of Strasbourg and a Master’s degree in Business Law and General Law.

He speaks English and French.