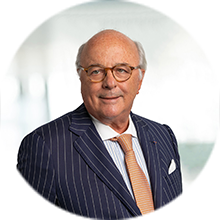 
Norbert started his career with the Financial Services Regulators in Luxembourg in 1974, where he was in charge of the regulatory supervision of financial institutions.

In 1979, he founded the Andersen firm in Luxembourg and became its Managing Partner. In 1994, he was appointed member of the European Operating Committee of Andersen and served as a Regional Managing Partner, in charge of Central Asia, Eastern Europe, India and the Middle East. In 1998, he was appointed Global Managing Partner of Finance, Administration and Infrastructure of Andersen and moved to both New York and London. In 2002, he managed the merger of over 50 non-US Andersen member firms into Ernst & Young (now EY), of which he served as CFO on the global board. In 2004, he returned to Luxembourg and launched various business ventures, including ATOZ, and Compagnie de Banque Privée Quilvest, a bank fully dedicated to wealth management. Norbert serves on the boards of several international corporations and advises international families and was appointed Sole Trustee of the Royal Household of the Grand Duke of Luxembourg.

Norbert is engaged in foundations and non-profit institutions, such as the European Leukodystrophies Association (ELA) and the American Hospital in Paris, being a member of the advisory board and the Board of Governors respectively. He is also a member of the Amis des Musées in Luxembourg and supports the Museum of Modern Art (MUDAM).

Norbert was elevated to the rank of “Commandeur de la Couronne de Chêne” in Luxembourg, being appointed by the Grand Duke, Officer of the Civil and Military Order of Grand Duke Adolphe. He was also awarded the Paul Harris Fellow of Rotary International.

Norbert has a Doctor honoris causa degree of the Sacred Heart University in Fairfield, Connecticut, the United States.